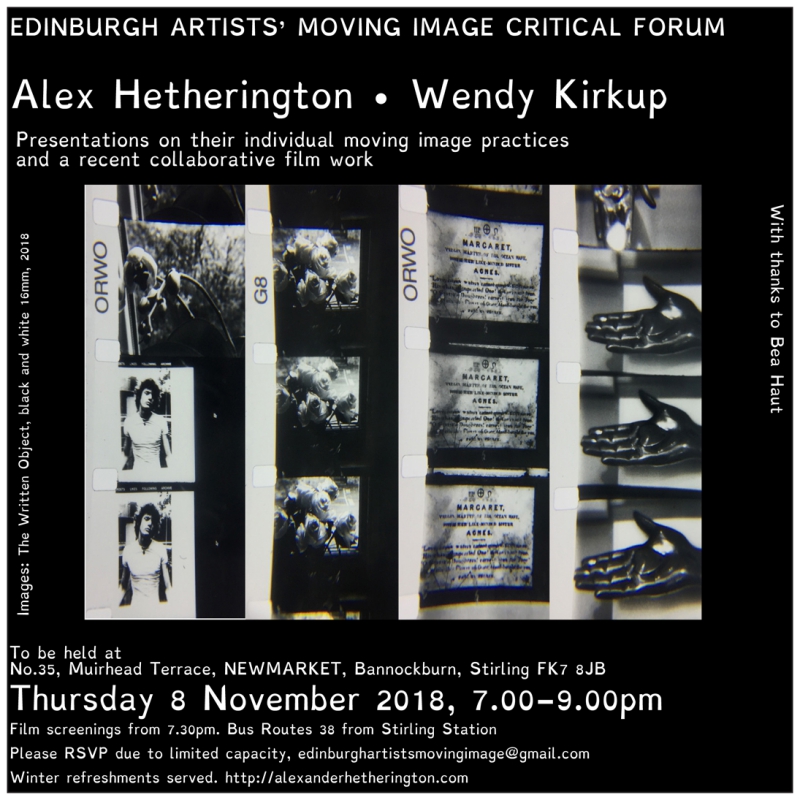 I am screening a film experiment made after Rose Lowder’s masterclass and reading Flaubert’s Bouvard and Pécuchet after seeing some films by João Maria Gusmão + Pedro Paiva and reading Chris Sharp’s essay on their show at Camden Arts Centre. The film is also in part made in response to discussion with Jane Topping.  About failures, collections of knowledge, commonplace books. A bridge between experiences.  In turn I have invited the wonderful Wendy Kirkup to speak about her recent video works on music, score, voice and improvisation and some discussions we had that led to a little film experiment we shot across Glasgow. Parts of this film will be on little loops with other outtakes and sequences. I’d like to also thank Mark Daniels at New Media Scotland.

1. A filmic exploration by means of botanical imagery: Notes on Rose Lowder, by Enrico Camporesi

2. (On the films of) João Maria Gusmão and Pedro Paiva by Simone Menegoi

3. Bouvard and Pécuchet, by Gustave Flaubert, Chapter 6, ‘Researches in Archaeology’,

4. Nothing gets easier with the passing of time.

5. The film Peter, by Jane Topping

Peter (Dir. Jane Topping, 2014) re-frames what is considered a classic of dystopian cinema (Blade Runner, 1982, dir. Ridley Scott) with the intention of positioning the artist within the text and so implying that such radical gestures are not only warranted and necessary, but also implicit in the contemporary viewer’s experience of watching film.

Peter manipulates found footage and narrative voice to reveal difficulties of viewer identification when watching Blade Runner. Peter makes use of wholesale appropriation of ‘facts’, both visual and textual, personal and public, in order to create a new reality around the film. The use of personal biography and the trope of the unreliable narrator are key elements in the discussion of the illusive nature of truth at the core of Peter.’