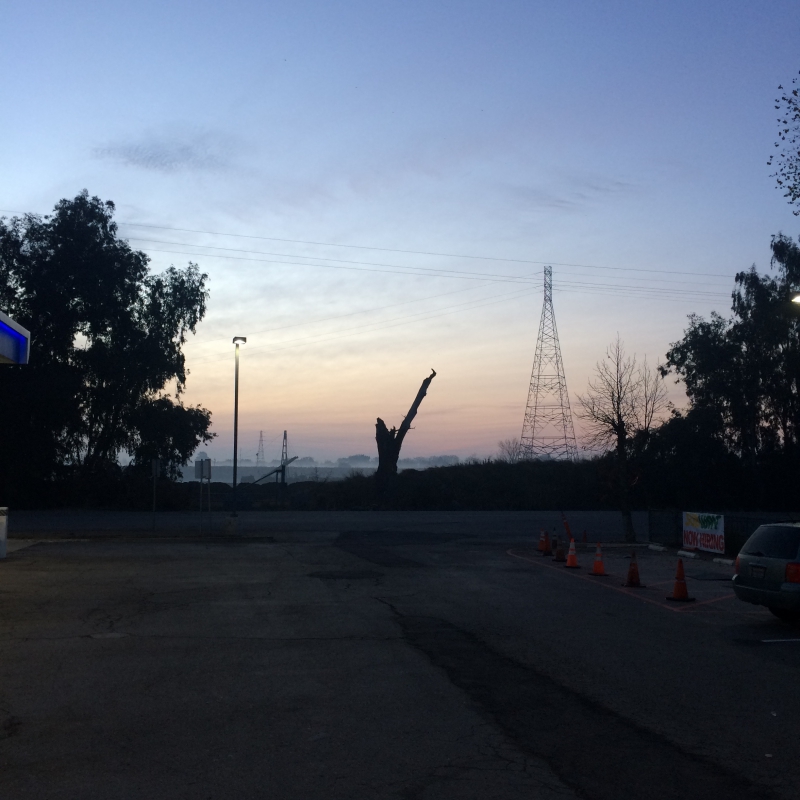 (I noticed today, 21 July 2019, that Enigma Bodytech is a car wash and body shop facility in the South Side of Glasgow near Tramway.)

I think about how video like Glasgow-based artist Kimberley O’Neill’s work become memory-inducing machines for me. About familiarity.

These images she presents on screen across freeways in California could be images from my own camera, from my road trips to Yosemite, further across state lines to the Grand Canyon, through the ghost town of Mineral Park and the airplane boneyard at East Kern airport at Mojave and onward to the desert; or to Carson City in Nevada, climbing the mountain road to Virginia City to hear about the legend of the Suicide Table and the Comstock Lode at Virginia City and Reno or to Los Angeles, over The Grapevine and then further, passing Oceanside, to San Diego and the border with Mexico. I think about how difficult it is to record these places adequately, their vastness and remoteness, gigantic sky and endless space. I think also about the enormous and now invisible labour that went into building these freeways, as they cross plains and into mountains, circling, spinning, vertigo-inducing, terrifying roads skirting and slipping along the edges of precipices and deep canyons. It all reminds me of Ann Hamilton’s performance and sculptural installation work ‘Indigo Blue’, originally conceived in 1991, “which consists of 18,000 pieces of used, blue, cotton work clothes, while a performer is seated, and erases passages of the book published by the Naval War College, title ‘International Law Situations’”.  (http://www.marthagarzon.com/contemporary_art/2011/01/ann-hamilton-indigo-blue/) It mirrors O’Neill’s piece as in its passages a voice mentions computer technology, the contemporary industry, as a place between ”amplification and erasure”. Traveling along these wide freeways I hated watching the slivery oil trucks, highly reflective shimmering bodies amid the long lines of rigs, disappearing into the horizon, crossing states, guided on by distant thundering horns from the railroad. Or the fleets of white tech shuttle bus that leave Market Street in San Francisco in continuous endless loops taking technology company employees from the city to Google Headquarters in Mountain View, near San Jose (incidentally home to the famous Winchester Mystery House, the mad Sarah Winchester and her never-ending building project bound in paranoia, wealth and superstition, a fever dream made real.)

The white shuttle coaches are a symbol of San Francisco’s gentrification and of how technology  and its money has changed the nature of the city – liberal, open-minded counter culture narratives from the past slowly erasing and replaced by the capitalist philosophies, data as lucrative market, behind things like Salesforce Tower, the city’s tallest building standing at 415 Mission Street between First and Fremont Streets, Twitter at Market Street close to Van Ness Avenue and Facebook in Menlo Park.

A deep sinister tone plays at times throughout O’Neill’s work, along with sounds from radio channels and car audio books, while recordings from the body play alongside passages of fragmented or observational narration from bodiless voices.  A series of disjointed abrasive and contradictory phrases read by artist Emmie McLuskey reinforces a sense of the unreliable narrator. In addition passages of spoken-word affirmations from hypnotic self-help audio tapes synchronized to footage of mountain vistas and wide roads add to a feeling of illusion, doubt and dislocation. A disquieting tone plays alongside footage from outside Google’s headquarters, which pitch shifts down and mellows synchronized to a series of enclosing hand gestures held in meditative poses that seem redolent of artist Daria Martin’s film ‘Sensorium Tests’ (2012), about mirror-touch synaesthesia and the melding of sound, the spoken word and image and colour – an exploration in empathy, I think. In the passages speaking about the recent histories in computer technologies, especially the internet and networked cultures I am reminded of American artist Tyler Coburn’s piece ‘I’m that angel’ (2012-2013), a book and series of performances sited in data centers. Writing in Frieze magazine in May 2014, Karen Archey writes: “Coburn borrowing from Russian writer Viktor Shklovsky’s process of defamiliarization (which presents familiar material in an unfamiliar way) introduces us to the often-invisible and nearly incomprehensible inner workings of the mechanisms, interfaces and machinery that facilitate our daily interactions with the computer, and simultaneously defamiliarizes us with the hyper-contemporary speech and behaviours these technologies have helped birth.”  (https://frieze.com/article/focus-tyler-coburn)

Among the reading materials for Petra Bauer’s new film ‘Workers!’ (2019) also on view at  Collective is the publication ‘Witches, Witch-hunting and Women’ by Italian-American feminist scholar Silvia Federici in which she argues that “witch hunts in sixteenth- and seventeenth-century Europe and now in the “New World,” are a structural element of new forms of capitalist accumulation.” On page 13 of the volume published in 2018 Federici writes: “…unprecedented technological development and the return of phenomena that are usually associated with ‘underdevelopment’… a broad pattern of social disintegration… the same capitalist expansion that has led to the computer revolution has also been responsible for the return of forms of life that recall the ‘Iron Century?” I wonder in O’Neill’s work, placing the female protagonist at the heart of this journey through California, from Death Valley to Silicon Valley, the artist seeks to look at feminism and global capitalism, especially framed by the deployment of personalized technologies, and the human as ‘perfectible’ and relate them to Federici’s notions of ‘enclosure’? I think this is reinforced by O’Neill’s refusal, unlike in most road movies, to reach a point of arrival, a destination. In doing so she keeps the ‘enigma’ intact.

O’Neill cites Rudolph Wurlitzer’s ‘Nog’ (1969) and Ann Quin’s ‘Tripticks’ (1973) in the structures of ‘Enigma Bodytech’, literary narratives about the road trip as analogy for an “individual’s quests to disconnect from society and escape the self” but to my mind O’Neill borrows greatly from the road trip in visual art and cinema, and its inventory of escape, loss, removal, transportation, mysticism and poetry and through O’Neill’s thoughtful and bewitching expansive travelogue and its cut-up voice-over the roads she depicts conjure the desert’s hallucinations and mysteries, touching on, at times, the phenomenon of road hypnotism, also known as “white line fever”, I am reminded of Joan Jonas’ ‘The Shape, the Scent, the Feel of Things from 2008: the artist’s travelogue from California to the Mojave desert via the writing and experiences of German art historian  and cultural theorist Aby Warburg, some touching on the historian’s experiences with schizophrenia; Wim Wenders films like ‘Paris, Texas’ (1984) and ‘Alice in the Cities’ (1974) and its nod to ‘Alice’s Adventures in Wonderland’ from 1865; to David Lynch’s study in identity loss, transference and time travel in ‘Lost Highway’ (1997), Alfred Hitchcock’s ‘Psycho’ (1960) and Gus van Sant’s ‘Gerry’ (2002) based on the true story of the death of David Coughlin in the desert at Rattlesnake Canyon in New Mexico in 1999, and in which van Sant makes references to Béla Tar’s slow cinema masterpiece ‘Sátántangó’ (1994) in which the long take acts as a metaphor for wildness and the wilderness and the dangers it hosts, and to Margaret Salmon’s film “Study of man in a truck based on the story John told me’ from 2010.