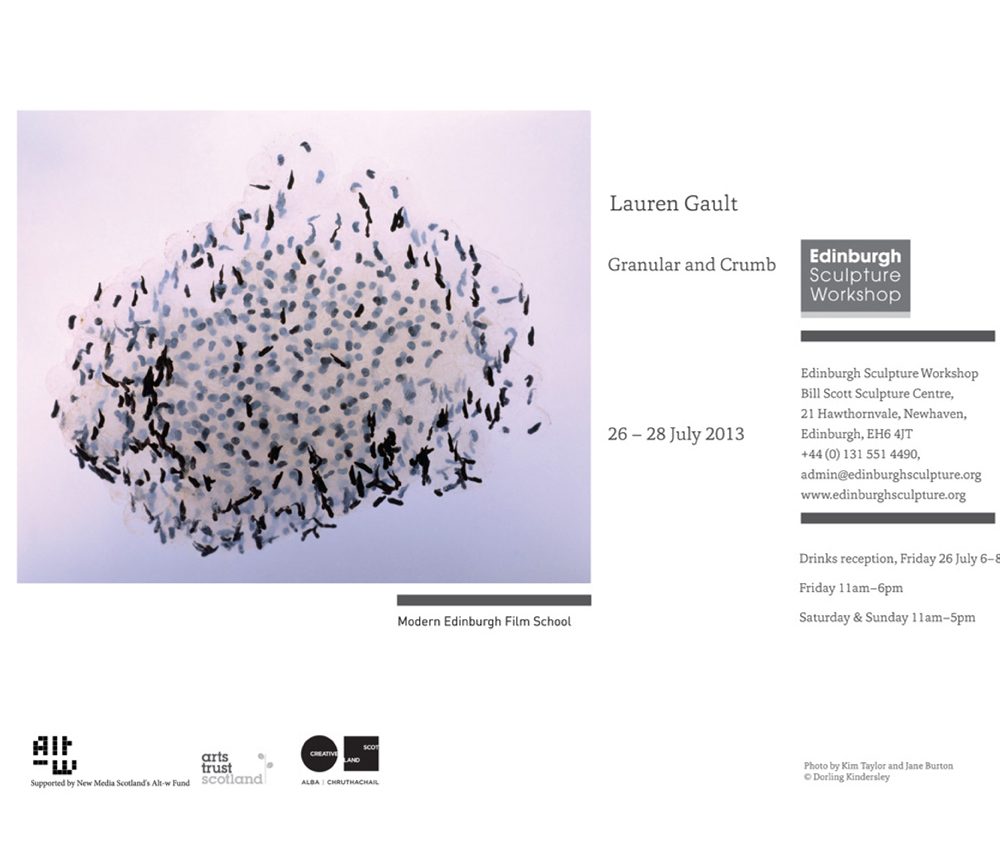 A Place of Thought, on Lauren Gault

Granular and Crumb is an interlacement of essences, materials and methods. An installation that consists of ceramic objects that are arranged and appear towards the lower production spaces at ESW – these glazed blue dextrous mutable pieces are distributed through its interstitial landings and stairwells and lead to the open vestibule basement which hosts a new film displayed on a purpose-built screen/wall. A large-scale print of a found image of tadpoles is set within these spaces alluding to key notions in this project on articulation of form and substance, of between states, and about to inhabit. To sequences of processes, like filtrations or cultivations, that work towards conditions of purity or fineness. In turn to the application of actions – like massage, glazing, polishing, gripping, pouring and moulding that express a material’s species: its composition, tactility and animation. And through these reflective glittered deep blue, light blue renderings and accompanying moving images ideas on the parities between surface, sight and feeling.

Gault’s project alludes to the materials of animals, in particular, equine anatomy: the ‘frog’ of a horse’s hoof: a structural form that aides the movement of the animal and an important apparatus in the circulation of its blood.  The ‘chestnuts’ growing on a horse’s legs, a vestigial toe, also called ‘night eyes’, and often compared, due to their unique formations, to human fingerprints. ‘Ergots’, calloused formations on the underside of a horse’s fetlock, or knuckle, that feel like the eraser at the end of an old-fashioned pencil and a horse’s ‘feather’s’ the fine hair on the animal’s lower legs.

In turn there is an impulse to make apparent sound, purpose and place: pointing out the repetitive mechanical noises of the makings, hand crafts, and tooling happening with the Workshop’s production spaces: wood, metal, stone and industrial terms, often from a farming glossary, that reiterate parities between action and function –  a musicology and mimicry seen in a discreet spoken reference to “broadcast seed fiddles”.  Gault’s film soundtrack draws attention to the sonic vocabulary of ESW and reveals what can be experienced from the building’s acoustic personality, its forms in productivity and resonances in chance.

Granular and Crumb, within Modern Edinburgh Film School, is a layering of conversations and dialogues, and is a place of thought. It an important staging in this broader project on the condition of how moving image and its materiality and sculptural processes and its ephemerality illuminate each other. It is given to a more risk-taking potential, inhabiting a short time frame, and yet forms a continuity to her recent solo show “Sweet Ensilage” at Tramway and two-person show with Perri MacKenzie “My Very Easy Method Just Speeds Up Naming Planets” at Glasgow Project Room at Trongate 101.

The project here is a constellation, a diagram of works and analysis on a viewer’s position and perspective, a choreography on viewership and a method of display, glimpse and glance, and a space on the ideas of intuition and instinct.