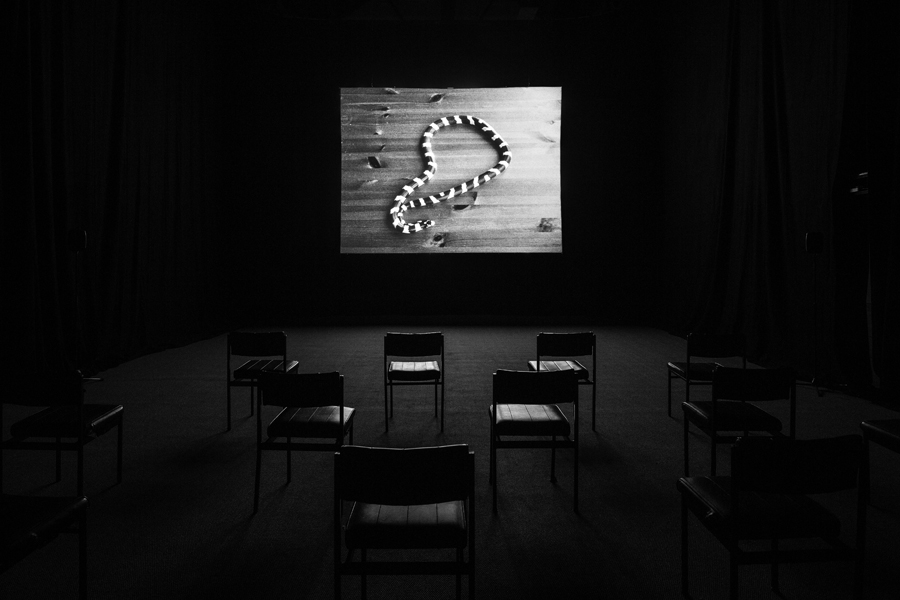 Review for ‘This is Tomorrow’, first published 27 February 2018

American Glasgow-based artist Margaret Salmon’s filmic, atmospheric, and carefully rendered installation, sensitive to the nuances of people, the subtleties of places and objects (and her relationships to them) is housed in Tramway immense principal space, and renders it quieter than normal, in half-light, a place for a rare, esoteric experience. The project, curated by Nicole Yip, consists of a weekly evolving programme of 16 and 35mm film works, entitled ‘Here’, ‘There’, ‘Everywhere’ and ‘Outside Over There’, alongside a new six-channel audio work, ‘Part-Time’, which intermittently plays out a broken flow of found sound, whispers and conversations from Salmon’s archives and ‘Company’, a stacked set of nine monitors screening a cascade of outtakes, cuts and scenes from the marginalia of her principal productions, each monitor sequentially fading to a flat surface single-colour panel, until the array appears like a fluorescent cine-film colour checker grid.

The installation’s collective experience presents a diaristic flow of criss-crossing sound and vision from American life: scenes of domesticity in the life of African American family, suburbia, hunters, a man asleep, a man boxing, and older woman walking her dog or moving slowly through a room, the camera’s gaze resting on domestic light fixings, middle-class domestic architecture (often empty), glitter-like street lighting and objects disguised by heavy snow. It presents absences and feelings, blinding lights (often threatening to overwhelm the screen), strobe effects, repetitious anger, people smoking, sweating, ageing, washing the car windows, losing their memories. Voices emit love, lullabies and despair, and rage and grief often encoil. Slowly, it evidences Salmon’s care for the transmission of the subjects, her ‘behind-the-scenes’ or ‘lives overlooked’ subjects. Her mechanical cameras becomes a literal ‘medium’, a camera clairvoyance. As she draws, through the screen, a psychic or mind-reading bond between herself and these portraits and these places.

The processes and constraints of 16mm filmmaking are matched to an observation of the struggles of the everyday. Film’s colour palette, windup mechanisms, light meters, grain, exposures, and image gamuts, film burn-orange at the end of a roll, silver’s sensitivity to light, the nature of capturing elusive images in changing light are all expressions of ideas of care and intimacy. What film emulsion contains (potentially dust, fibres and fog) is its precariousness and its understanding of the passing moment; its ability to sense and give expression to the essences of a subject. Salmon’s everyday is composed, mundane, magical and hypnotic; she finds kinship with her subjects – how she makes empty spaces feel haunted and alive, connections between the living and dead physical and present. And in bringing these kinds of conflicting ideas together, in unflinching parallels, gives form and light to what the late-American experimental filmmaker Stan Brakhage, in revealing the universal, in looking directly at life, lives lived and lives passing, in witnessing, described as ‘the act of seeing with one’s own eyes’.