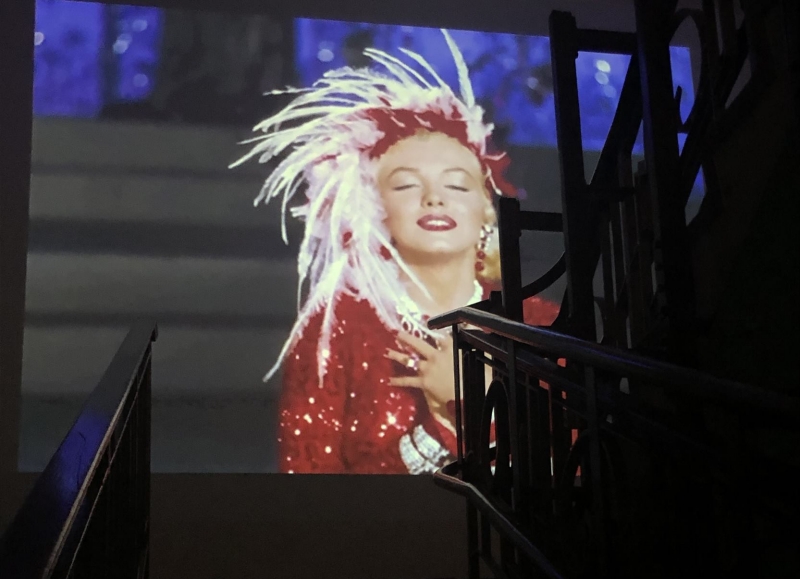 A review of A is for Avant-Garde, Z is for Zero

A is for Avant-Garde, Z is for Zero: Laura Mulvey & Peter Wollen

A is for Avant Grade, Z is for Zero, a retrospective of film, curatorial and written works, intermixing the disciplines of feminist and gender studies, film theory and social activism by filmmakers and theorists Laura Mulvey and Peter Wollen, is prefaced, in the entrance hall of Cooper Gallery, by a single work — the essayistic 16mm documentary Frida Kahlo & Tina Modotti (1983). The film offers a double encounter of two women artists active in post-revolutionary Mexico and is framed by and alludes to the remainder of the exhibition’s central propositions and provocations:

1. what American artist Mary Kelly describes on a tape recording from the ICA, London from 1983, which I think refers in part to to her installation Post-Partum Document (1973-1979) about “the personal as the political” in relation to feminism and its spaces overlapping and between the “social and the psychic”; and in turn to women’s experiences of motherhood, and relationship between mother and child “remaining outside of language” and extending from how women’s overall experiences collectively were and are “outside of language”, “not available to language” or ”not speakable, not utterable” – what the artist describes as a “negative entry”. It is not a surprise then that a great of this exhibition’s holdings are archival audio recordings, and which encircles the gallery’s central space in a colloquy of voices.

2. Historical recitations, in the form of positive entries, speak directly into this contemporary agitated and increasingly urgent moment. Some of the voices are ghosts.

3. Temporalities which criss-cross the social and psychic, underpinned by an intellectual generosity, operating through interconnected lines of activism, romanticism, lyricism and animation, illustrating feminism’s hybridity and intersectionality: Kahlo’s mystical, psychoanalytical paintings, Modotti’s radical, nomadic and migratory photography, the Sphinx and her riddles.

4. How psychoanalysis and feminism spills into the reading and viewing of Hollywood and narrative cinema, described through further essays and essayistic screened works, an accumulation of voices, writing and images on visual and other pleasures. Moments when the camera meets the eye.

5. Which over the experience of the exhibition come to chronicle the importance of the artists as interlocutors, described in the exhibition’s handout as a “mutual influence between educational and artistic work”.

6. And which relies on forms of distribution, printed matter, greatly in evidence here, and drawing attention specifically to displayed pages from the pioneering magazine Spare Rib, which emerged from the British Women’s Liberation Movement in the early 1970s until it ceased publication in 1993, entwined into the necessities of protest, cooperation and collaboration, articulating feminism, the personal as the political, as an adapting expressive collective and community action, which is further evidenced through Laura Mulvey, Lynda Myles and Claire Johnston’s introduction to the Women’s Film Festival, also known as The Women’s Event 1, held as part of Edinburgh International Film Festival in 1972.

7. Which is an example of how you make theory purposeful.

Acting like a visual caesura and foreshadowing further encounters with Hollywood cinema (layers of seduction, sexuality, gender, glamour and psychoanalysis) and projected at scale is Mulvey’s video GENTLEMEN PREFER BLONDES (remix/remixed), 2013, which choreographs a set of disrupted gestures from a musical sequence which sees Marilyn Monroe flirt with a male audience member while performing the song A Little Girl From Little Rock. The film fragment from Howard Hawk’s 1953 motion picture evidences Monroe’s startling highly adorned image locked into video technology’s cyclical grip: gestures are examined, pause and fade out, narrative progression is halted, meaning is deferred, desire is interrupted.

Interruption, arriving in the form of social lockdown as a reaction to the coronavirus pandemic, resulted in the closure of the physical spaces and the development of an expansive, proxy sister-project, an Internet detour captioned as A Space In-Between, a method by which the gallery could maintain connections with its audiences and artists, while broadcasting and multiplying though a profusion of other voices and appearances replicating for this moment the intentions of the missing retrospective as a socially proactive engagement. This events program included Hear, Here, new sound works on themes of observation, displacement and attention by Anne Bean & Nicol Parkinson, Anne-Marie Copestake, Tina Krekels, Georgina Starr and Viola Yeşiltaç connected to the plural expanding suggested reading list What I am Reading Now…, an iteration of a printed column, of the same name in Cooper Gallery’s occasional periodical &labels composed of contributions from “Black practitioners and practitioners of colour to share, with a preface, a selection of five readings that are shaping their current thinking, research and practice.” I think too of American philosopher and poet Fred Moten’s Consent not to be a single being, a trilogy of works: Black and Blur (2017), Stolen Life and The Universal Machine (both 2018) considering the “place and force of blackness in African diaspora arts, politics, and life…in so doing [he] unsettles normative ways of reading, hearing, and seeing, thereby reordering the senses to create new means of knowing”. 2

A is for Avant-Garde, Z is for Zero and A Space In-Between combine through physical entries, external links and liminal events to present a diverse grouping of mystical, activist, deviant and radical practices. And I think each element in its archives of presentations, performances and ephemeral materials however they make an appearance through sound, monitor, screen or physical object act as a synecdoche, each element describing or voicing the whole. As can be seen in a handwritten letter from American choreographer Yvonne Rainer, Kerry Tribe’s split-screen video projection Here & Elsewhere (2002), Georgina Starr’s On the Trail of the Unknown (2020) “dazzled with ambiguities rooted in magical formulae, dreams, curses and poetry” 3, artist Margaret Salmon and Laura Mulvey speaking online alongside a screening of Riddles of the Sphinx (1977) framed by Salmon’s deeply personal biographical written response or the handwritten and typed index cards from Mulvey and Wollen’s Penthesilea, Queen of the Amazons (1974) all working in combination in advance of a theme of ‘simultaneous understanding’.

2. https://www.dukeupress.edu/black-and-blur, Black and Blur, Fred Moten. Moten writes in the preface that ““Consent not to be a single being” is Christopher Winks’s translation of Édouard Glissant’s phrase consent à n’être plus un seul…issuing an invitation into the ensemble for one to no longer be alone” (accessed November 3 2020)