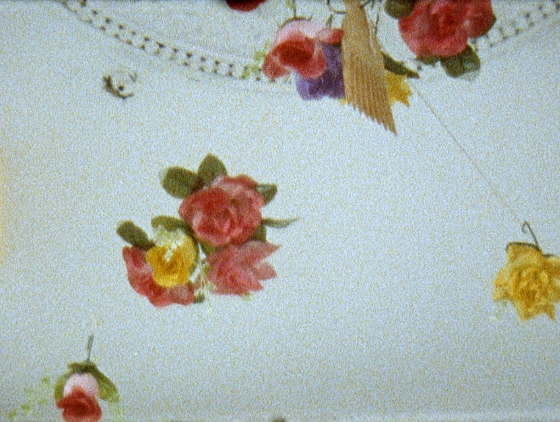 Anne-Marie Copestake: Looking in either direction the whole street was filled with people, some singing, moving towards x

‘Looking in either direction the whole street was filled

with people, some singing, moving towards x…’

Glasgow-based artist Anne-Marie Copestake presents an idiosyncratic installation of overlapping sound, film, voice, text, hand-made objects and personal materials that collectively bring the actions of life – the moment, the domestic, the everyday, its minutiae and the passing of time – closer to the actions of art.  Composed with the intimacies of a love letter, infused with the qualities of daydreaming and shaped by the gestures of the hand, particularly handwriting, the caress and folding, the work on show is by turns diaristic, autobiographical and self-reflecting – curious and sensitive to the now. Copestake’s work expresses something of the potency of gentleness, quietness, twinning and plurality; all the while sound and image shift through a call-and-response action of revealing and concealing, appearing and disappearing, distance and proximity. In doing so the installation makes reference to the hauntological, silhouetted by bodily absences, shaped by the missing and recordings of the departed and the past. Equally at play is an expression of the seasons as a coda for personal change, with depictions of autumn, spring, summer and winter and highs and lows of temperature and light.

Meditative, abstract sound in the form of tones, hums, clicks, broken chords, electronic whispers, sound waves and breaths bind the space together, while a series of texts circumnavigate the gallery giving the installation an enveloping filmic voice-over

‘A Love’, a new super-8mm film, unfolds as a touch-of-the-hand gestural narration of intimate moments and digest of the poetic everyday; its rich colour palette and soft focus is redolent of the lyrical camera of Margaret Tait and the dignified, documentary camera of Margaret Salmon. A heavy, solid plaster screen presents three early video works: a commentary on self-erasure, a woman in a summer field laughing and a kaleidoscopic camera and mirror capturing a tree bundle together forming a new entity. Elsewhere a papier-mâché cape festooned with ink drawings and doodles, patchwork colorful paper sacks and observational texts combine to illustrate the working of the introspective mind.

Embedded in the installation is the archive of Copestake’s seminal project Trigger Tonic (1999-2004), an invitation, facilitated by Copestake, for visiting and resident artists (a network of friends) in Glasgow to interview each other to camera. These video shows unscripted conversations between different kinds of artists and witness the energy and atmosphere of a generation and their time and equally to what can result when improvisation, collaboration, feminism and a ‘seize the day’ frame of mind become your principal, guiding tools.

This propensity for collaborative action extends to two public events during the exhibition’s run, an extended playlist of music, sound, film and discussion: the enigmatically titled ’Thin gold chains link ears to the tip of their tongue’ and ‘To recognise with the certainty of an ideal sibling’.

To my mind this wonderful installation reveals itself as an elucidation on the impulses of the wandering daydreaming mind and gives dimensions to what Alexandre Dumas, writing in 1844, describes as ‘nothing makes time pass or shortens the way like a thought that absorbs in itself all the faculties of the one who is thinking. External existence is then like a sleep of which this thought is the dream. Under its influence, time has no more measure, space has no more distance.’