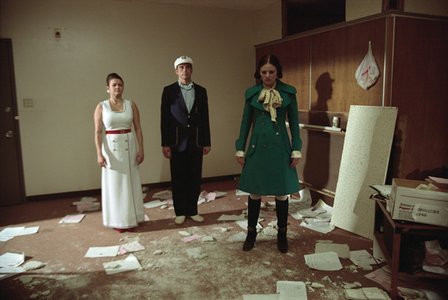 Los Angeles-based video artist Catherine Sullivan’s work could easily be described in terms of radicalising theatre companies like Sheffield’s Forced Entertainment, Chicago’s Goat Island or New York’s the Wooster Group rendering Powell and Pressburger’s seminal 1946 movie A Matter of Life and Death through their mechanics of reduction, recombination, reference, distortion and fuck off art, audience and theatre tactics and procedures. Like these groups she has no restraint in disorganising the characters portrayed and what they represent, has no sense of a precious approach to the original material and has no reason not to interrupt the proceedings with confrontation, referenced associative materials or sudden and inexplicable changes to a continuous, linear ‘narrative’. That Sullivan’s background is in drama therefore explains in part her motivations and some of the theatre techniques and drama games, improvisations and warm-ups she presents at the core of her multi-screen video installations. Her shift to the visual arts, training at CalArts, reinvigorates her acting background with a progressive route map taking in emotional transcendence, intense psychological exchanges and an examination of theatrical conventions as a means to question the politics of artifice, the presentation of violence and trauma using the vocabulary of theatre. The Fluxus movement and art’s recent examination of cinema connects her over a broad range of stimuli to artists like Richard Foreman, Elizabeth le Compte, Chantal Akerman, Yvonne Rainer and Jean Luc Godard.

All of this in no way can describe how beautiful, insane, eccentric, disturbing and funny her work is; her video/theatre/art antics are perplexing and gorgeous, her assembly of actors authentic in their irrationality and her collaborator composer Sean

Griffin’s soundtrack moving and disquieting in its restraint.

At CCA she presents two works: ‘The Resuscitation of Uplifting’, 2005, a single screen work derived from the installation ‘The Chittendens’, 2005, and ‘Ice Floes of Franz Joseph Land’, 2003. They both employ similar production techniques: impassive cameras, untouched sites as sets and she instructs the actors to embody a range of physical and emotional circumstances or ‘attitudes’ which are then performed in repeated units or in multiple permutations which then generate chaotic interference, pronounced emotional exaggerations. Characters from time – signified by period costume, like Harold Lloyd movie strongmen, 70s uptown New York socialites, extras from The Magnificent Ambersons 1942, exist apart, perform and remain as if frozen in one place in one state—collude to engineer their evidence of trauma and crisis. ‘The Resuscitation of Uplifting’ works towards an examination of American business culture, taking reference from a failed insurance company the Chittendens and spirals round notions of boom and bust, evictions and foreclosures. ‘Ice Floes of Franz Joseph Land’ sources the Chechen rebel takeover of the Russian musical Nord Est in 2002, in which actors and audience were held hostage for several days, smashed into a tale of love and adventure in the Arctic Sea. Both works articulate frictions between real and artificial, using the theatre and fiction played beside an account of actual trauma that suggests the absurdity and violence of life once the curtain closes.