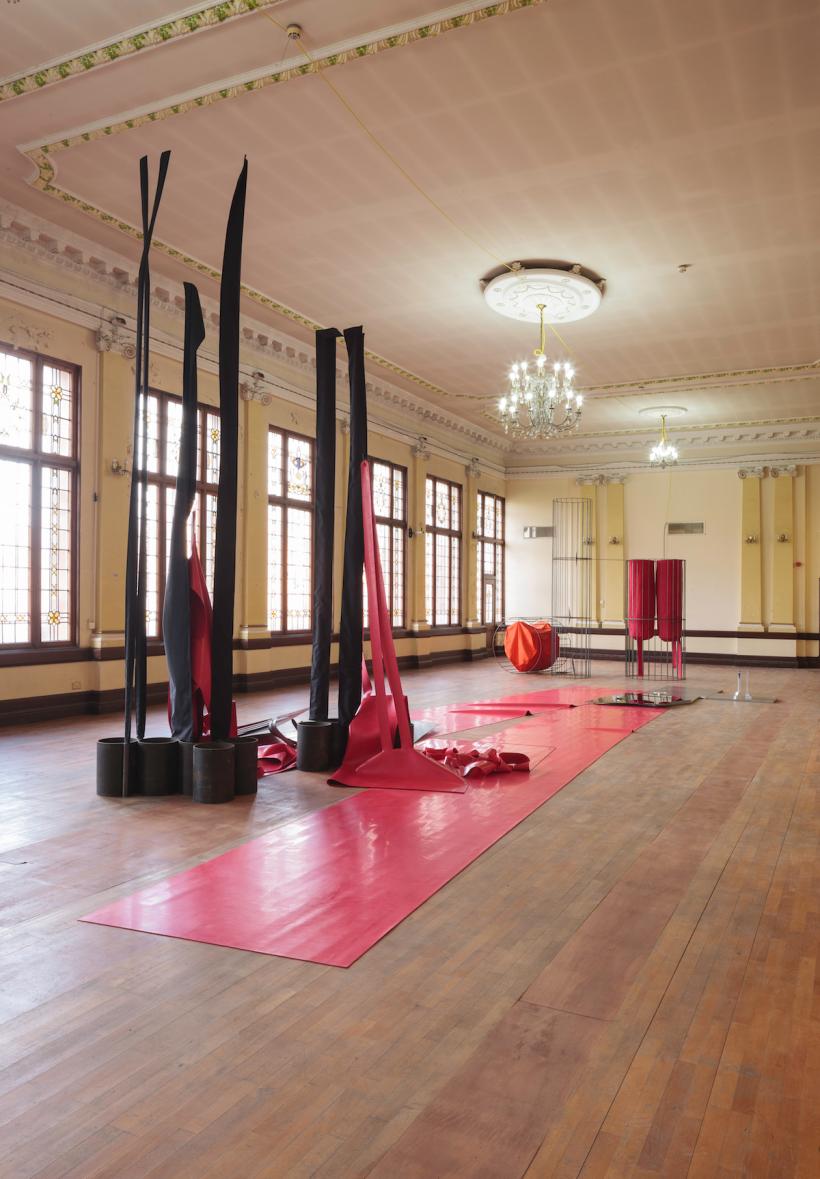 Claire Barclay’s installations draw on a performative vocabulary that sees objects, materials and spaces become folded, flattened, extracted, embossed, cut, tooled, lengthened, stained and polished. Her large-scale pieces occupy their space with concerns for the horizontal and vertical, with volume and scale. Carefully arranged materials are presented as flowing actions and verbalise the conditions of their surroundings and histories. Barclay’s activities and substances are interchangeable sculptural processes, employed to summarise their sites: their functions, habitations, ecologies and genealogies. In Bright Bodies, a new installation for Glasgow International, Barclay’s sensitive and highly physical choreography is engaged in a course of action on the history, archives and social spaces of Kelvin Hall, a large-scale public hall used for carnivals and circuses, competitive sports and a temporary venue for the transport museum now housed at the close-by Riverside Museum, designed by the late architect Zaha Hadid. Barclay’s prime focus though is the Hall’s 1951 Exhibition of Industrial Power showcasing Scotland’s heavy industries and its scientific and engineering achievements. These industries and the Hall itself is in a state of demise, transformation and renewal through a process of rejuvenation and rebuilding to reopen as a new arts and cultural venue. These conditions of disorder and collapse, modification and restoration find form amongst Barclay’s flowing living poetic field.

Lengths of red rubber sheets form the foundation for industrial-scale spikes, fabric sheathes and cage-like forms that imitate, with their inserted sacks of red cloth, throats and lungs. The stinging caustic smell of coal-tar emanates from a pool of the substance as its spills onto polished metal sheets and its meniscus gathers dust and feathers. The installation is housed in a derelict space with peeling paint forming into clumps, ‘do not enter’, spray-painted signs, an industrial hum, the fumes of rebuilding, and leafs of paint animating the walls. Ceiling and stained-glass windows are highly decorated, but are abandoned to neglect and a piercing cold.  There is a visible clean line in the centre of the space and an accumulation of dust above, while windows open out onto views of Kelvingrove park, the university and its high tower, the museum, a nearby, also derelict, hospital and the medical school.  A war memorial for the fallen of World War One, sited in the park, mimics Barclay’s use of dark heavy metals and poppy-red spray. A ceiling rose, and three chandeliers, with modern energy-saving bulbs, look down on her project and give the room a fake, eerie fluorescence.

So surrounding the work are the mechanics of Barclay’s sculptural composition, its through, voids, underneath, beside, folded-over, folded-back, raised, tooled, polished, roughened, and raw, are evident in the place of its presentation. A sack like a lung is clipped to a raw steel cage skeleton, blackened inside, it serves to articulate the physical exertion of bodies working at large-scale dirty industries. A series of cleansed, hygienic, precise medical-like instruments are stacked at one side of the installation and are suggestive of surgery, anatomy and health-care. Barclay draws a line here to injury, pain and disease and the very vulnerable states of the body. The dominant red of her installation speaks about the body, its temporality, its skin and contradictory weakness and strength. While the colour, in this environment, has strong overtures of politics, labour and class.

Barclay’s surfaces – matt, mirrored, iridescence and deep black – in their arrangements, movements and proximities, are alluring and insightful. While her mechanical processes: hooked, balanced, weighed-down, scored and tooled is drawing in dimensional form. She alerts the space to itself, folding back on itself, heightening its details and properties. And through these materials to us evidence of a sharp awareness, reading and responsiveness to the built environment, its scale and human uses. Barclay’s attuned sensitivity is best expressed by a beautiful moment where a rendering in stained-glass of Glasgow’s coat-of-arms, a surreal collage of contradictions: The tree that never grew, the bird that never flew, the fish that never swam, the bell that never rang’ forms a symmetrical illusion, a reflection of itself in a carefully stationed mirror pool of black oil. Here Barclay converts a familiar symbolic emblem of the city and makes it seem unfamiliar, renewed by a simple gesture of reflective interpretation.