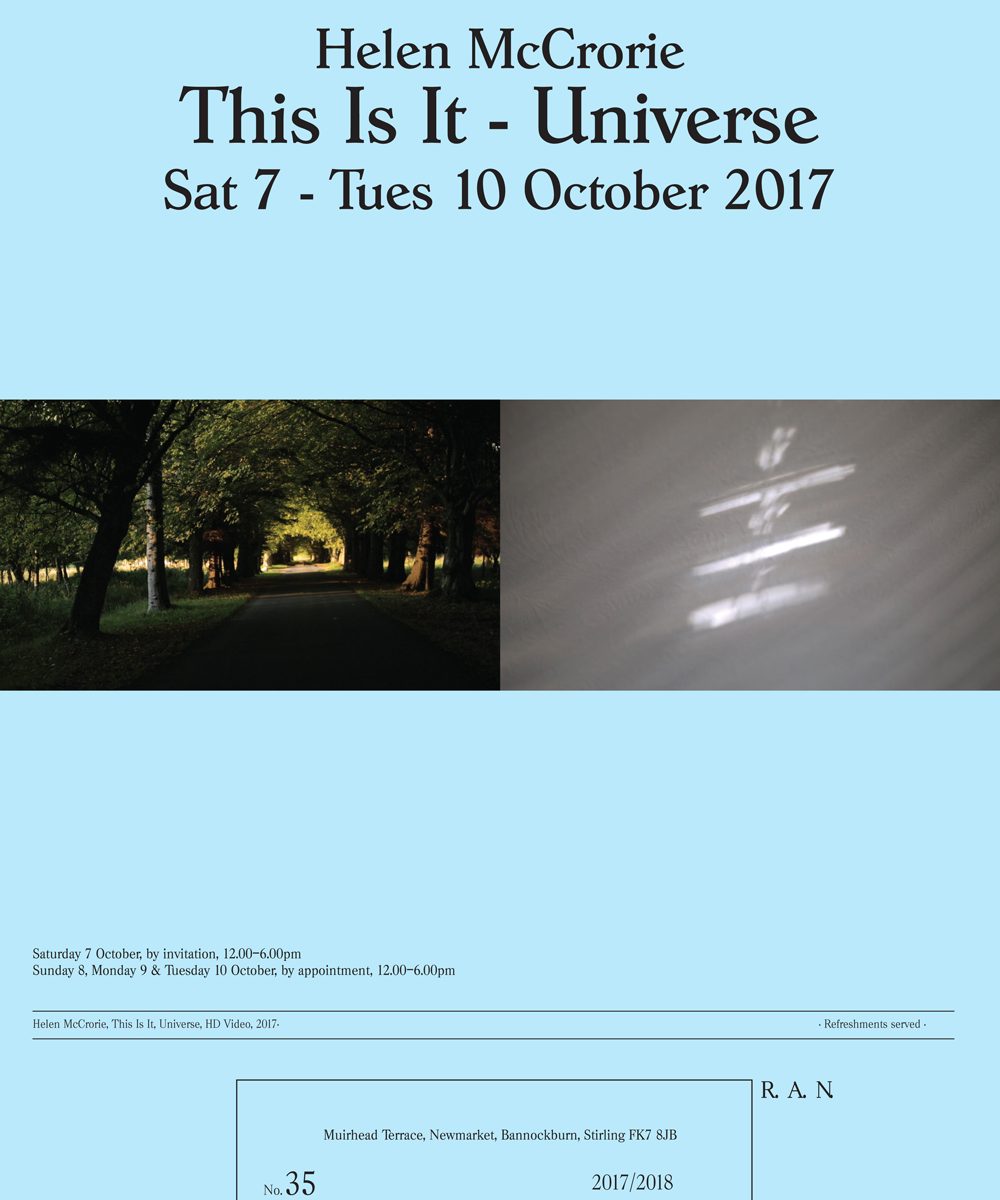 This is It – Universe, Helen McCrorie

THIS IS IT – UNIVERSE, video installation by moving image artist Helen McCrorie, October 7-10 2017.

There is an anomalous light feature here in the flat: a rectangle of daylight from a narrow windowpane above the entrance, that throughout the day projects its shape, like an inverse shadow, onto decorative etched-glass panel of the interior door or when the door is left open forms a bright shaft of sharp diagonal projected light.

I like returning to Helen’s practice. Because of what it inspires me to look at, (re)read, listen to and think about. About the music of her work, its rhythms, the textures of her camera, the grain of her screen, the qualities of voice she uses, the gamut of her subjects. What we talk about when we talk about film and moving image. Sensitivities to a subject, in portrait and of place, are hard to realise. In Helen’s moving image works these sensitivities glean, in long passages, in freeze frames, in edits and dissolves that form the elevation to the surfaces of her poetic documentaries. Sculptural attributes. I also thought about different artists working with video tape, sound recording technology, suspended time, spirituality and slow-motion, about ‘slowly turning narratives’, about the screen as travel, media and meditation. In turn, as Helen began to speak about the subjects of this new video work, woven through a portrait and observation of Elizabeth Michael, a crystal healer who runs a gift shop in the Perthshire town of Crieff, of the film work of Australian artist Allison Gibbs. In Gibbs’s practice inspection of themes of spirituality and psychic phenomenon (and its reception in science and philosophy) enfold into ideas of capitalist economics, film theory, the diary film or film essay, the therapeutic and feminism. While it also occurs to me (and an idea that Helen has picked up on) that something I wanted to look at through this entire project, with all the artists represented across these months, was the idea of the curatorial, used in a domestic space, as having a relationship to the curative. Employed as a method of a kind of healing. An idea of finding home, of settling in and becoming familiar with new surroundings made alongside and through artists’ responses to the space, its history and occupants. All forming new parts to the building’s narratives, adding to its anomalies and the character of its spaces Helen emails me some notes and some references that have shaped her approach here:

A quote from Sol Lewitt: “conceptual artists are mystics rather than rationalists”1and this passage in an essay by Dan Fox: “Art involves a conceptual investment in objects and images just as any religion invests significance in its icons and the ritual use of objects.”2

Exploring the complex ethics of an encounter, the gaze, otherness and connections between filmmaker, subject and viewer. Using a confessional tone, exploring my own motivations and deceptions, in reflecting on intimate filmed conversations with a crystal healer in her gift shop. The crystal healer, like the artist has an uneasy relationship with society’s normative and economic constructs. Playing with ideas of mainstream scepticism of contemporary/conceptual art. As an artist, I can swing from fervent belief to self-doubt about the positive and transformative value of my metier. The crystal healer’s aggrandised claims are belied by her contradictions, vulnerabilities and her sense of humour. Passages of frank or impassioned portrait are punctuated with observations of the simple play of light on surfaces. Connections between film and magic in the emergence of cinema.

2. Believe it or Not, Religion versus spirituality in contemporary art, Dan Fox, 1 November 2010, Frieze, https://frieze.com/articles/believe-it-or-not