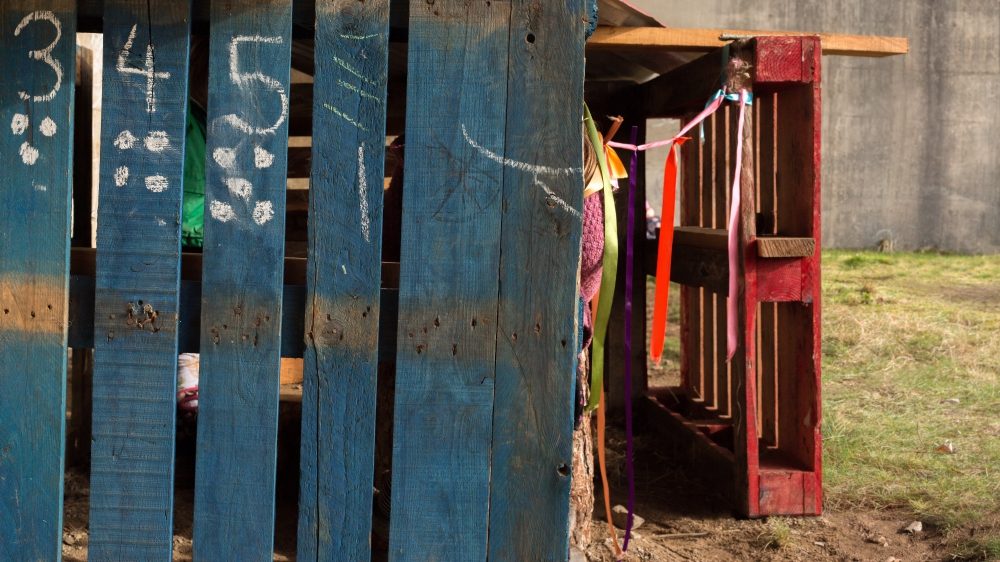 Helen McCrorie, If play is neither inside nor outside, where is it?

Helen McCrorie
If play is neither inside nor outside, where is it?

‘Indeed, we are given over from the start, so to have a body is already to be in the care of the other or to be in need of such care. We cannot separate our idea of a persisting body from networks of care in this regard; when infrastructures fail and falter, so too do we.’ Stephanie Berbec interviews Judith Butler about her book, Notes Toward a Performative Theory of Assembly published on e-flux. 1

When thinking about Helen McCrorie’s new film commissioned for this year’s Satellites programme I wanted to draw on or remind myself about ideas of assembly (how people assemble and recently with an increasing sense of urgency, how art works made of different elements or observations assemble and how exhibitions assemble), on performativity, dispersal, constellations, care, on ideas of shelter, and where children or childhood become central actors, disrupters and subjects of the artwork. In imagining McCrorie’s work I thought about Corin Sworn’s video Faktura, made in 2008, a palimpsest of use, play, deliberate demolition and a voyage of reuse, devised as ‘a short walk through a contemporary adventure playground in Berlin. While analyzing the aesthetics of child-built structures the video fluctuates between a documentary map and a more experimental montage.’ I think what Sworn is suggesting is that one discovers, and continues to discover, the world through the mistakes carried in building it, tearing it down and beginning again, in a safe space, made of the permissions (and the improvisations) of play. In turn to That Night Follows Day, 2007, produced and devised by experimental theatre and visual artist Tim Etchells, artistic director for Sheffield-based Forced Entertainment for the Flemish theatre company Victoria. A performance, which has recently been revived, delivered by children between the ages of 8 and 16, that begins from Etchells’ text collecting factual observations, often made of contradictory utterances, concerning the ways in which the adult world shapes and defines that of young people. 2 While the bunker at Cultybraggan, at the heart of McCrorie film, part-ruin and relic leftover from the Cold War, in a state of flux and repurposing, suggests some of Dundee-based artist Gair Dunlop’s investigations into entropic modernism and living with the legacies of military pasts that are continuing to shape the present moment.

McCrorie’s film, beautifully composed, made of deliberate, slow-moving edits and all the while cognizant of the moment and the environment, entwines wilderness and wildness, with its opposites, revealed in emptiness and absence, is about how an individual senses out a relationship with the world – often though repetition and repeated acts (collective or mirrored actions?) – to come to understand its material behaviours, its textures and edges, its sounds (ringing, thudding, hissing, bubbling and buzzing) and its colour spectrums, volumes and distances, coming to understand the properties a thing holds. How things hold and disperse meanings and histories. How things react and interact – rough stones and cold water on soft, new skin, bodies falling on damp ground, the sting of touching the sharp thorny heads of wild teasels, black charcoal disintegrating into residue while mark-making on hard surfaces, winter cold and icy breath against saturated colour seen in flowers, ribbons, orchards and children’s bright clothing in contrast to grey minimalist and nihilist abandoned interiors and how through its recording of the passing of seasons how we experience the movement of time and how that perception changes as we grow older. In short how we predict what the world might be like by having experienced, through memory and instinct, the catalogue of its possibilities. Yet in McCrorie’s film where the imagination is foregrounded the mysteries of the world remain infinite, and notions of discipline, conditioning, regiment or limitation, the measurement of the adult world, are described as distant, as almost out-of-sight inevitabilities. I think it is this inevitability that McCrorie seeks to interrupt or delay.  In turn the film is a description of what is hidden from us in the world, touching on some of its complex unknowns especially surrounding technology or the military: networked cultures, mass data movement, archiving, retrieval and storage, touching upon the operation of clandestine communications and interactions and the development of and reliance on technology and its internal and external languages. At this juncture McCrorie’s film comes into close proximity with the ideas embedded in Kimberley O’Neill’s work Enigma Bodytech presented earlier in the year. 3

McCrorie’s camera is a reflexive, sensitive device and I think the film chronicles, like all of her recent moving image work, something of the empathy and care, ease and serenity between the subject (the children display no sense of self-consciousness or awkwardness of being seen in front of a lens) and the observer, that throughout is transported from the screen and embraces the audience. At the heart of the work, there exists not just a question about the importance of play – its whereabouts, its meanings, who is allowed to participate, about permission and inclusion and denial and exclusion – but evidently in the film’s strategies surrounding the ‘space of appearance’, expansion, haphazardness, chance, humour, magical soundscapes, children’s voices and improvisations the work gathers itself, assembles itself as an invitation to ‘belong’ to the play and to anticipate the world like the children in the film anticipate the world. In doing so the artist gives shape to what psychoanalyst D.W. Winnicott describes in saying “I have tried to draw attention to the importance both in theory and in practice, of a third area, that of play, which expands into creative living and into the whole cultural life of man… [this] intermediate area of experiencing is an area that exists as a resting-place for the individual engaged in the perpetual human task of keeping inner and outer reality separate yet interrelated… it can be looked upon as sacred to the individual in that it is here that the individual experiences creative living.” 4

Helen McCrorie, If play is neither inside nor outside, where is it?, HD Video Still, 2019. Image courtesy of the artist. With thanks to Helen McCrorie and Eric Hildrew at Collective.