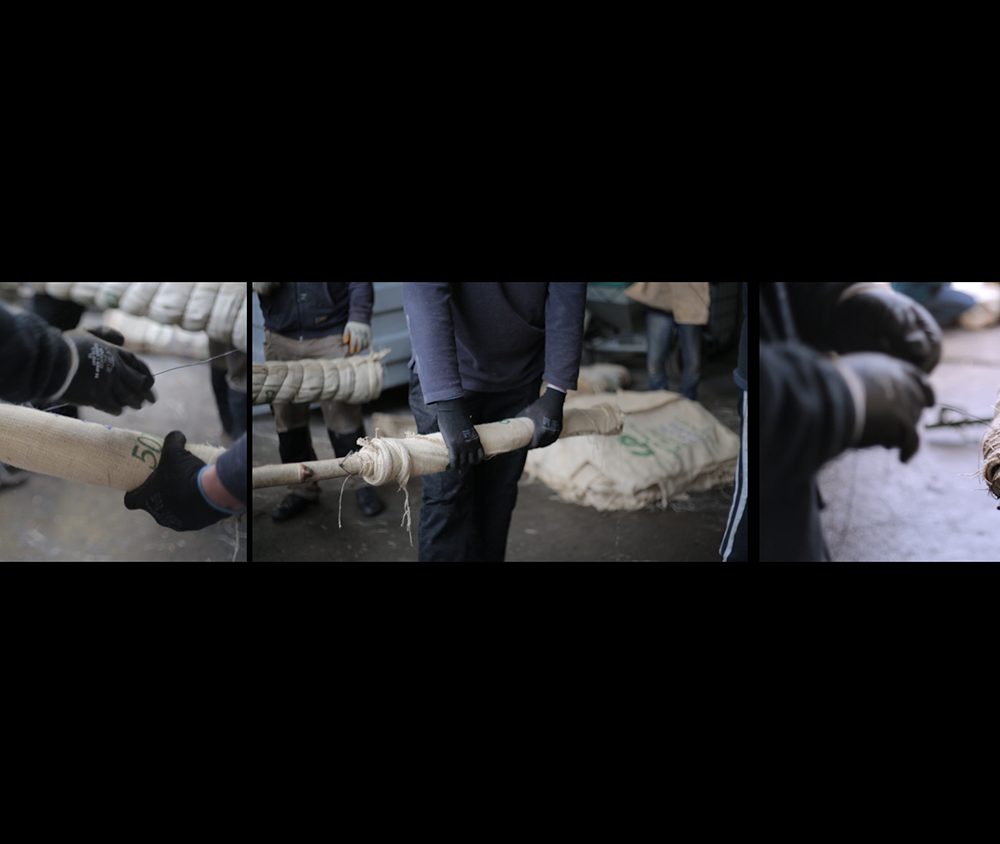 Modern Edinburgh Film School, published in an edition of 100

Visual artist Helen McCrorie’s video project The Clock in Commune is an analysis of time. Her study of the sensations and materials of time forms and is distributed over three screens. This delivery of moving image materials presents time as both an object and a process. Time as a survey – sculptural and performative. Time is indicated here as linear, cyclical, incidental and monumental. Nested inside the Glasite Meeting House, the stage for a now extinct and marginalised class of Christian worship, the video draws in on the spaceís theatre, its preserved but unsubstantiated mystical architecture. The video essay, a documentary of time ëdescribingí, evidences change – of the properties of materials, of personal transformations and measured states, often ambiguous and paradoxical.

The subjects of the work – the makers of a ritual to express the passing of the old year into the new and the observations from a candidate for priestly ascension – are folded into a dialogue on the camera as a time-machine, recorder of mutable histories, and a contradictory object of longevity; and the human voice, as an impermanent and sensitive species, captured by microphones, amplifiers, radios, telephones, public address systems and voice-overs.

McCrorie self-describes (in what philosopher Judith Butler refers to in her publication Gender Trouble (1990) as a “speech act” 1) the voice in the film, a narrator, whose gender is unfixed and neutral, like a bell, forming punctuation marks to its paragraphs of video verity: as they shift between external, internal, domestic, public and sanctuary (sacristy). The voice as a “bell” is a returning phrase in the video work and makes reference to forms of behavioural conditioning: the singing voice of the solo recital is described as a bell, the bell that rings in the canary’s cage and the bell held by keeper of the clock awakening the community for early morning prayer.

Later on we both observe on McCrorie’s technical and conceptual reference to Sans Soleil (1983) by French film director Chris Marker and its system of a female narrator re-speaking written correspondence from the fictional cameraman Sandor Krasna. One identity (or perception) segues into another and paints images, as they are recorded in sites in Japan, San Francisco, Africa and Iceland, as the passing of experience and presence to recollection, to memory, to certainty, to ambiguity and doubt and to forgetting. She tells me, “time is observed as measurements of repetition and recitation; how to sing is memory, what is sung is recital; how is time performed?, just like the video’s voice, how it is slowed down and how gender is performed.” She speaks about, “evidencing change in rituals and traditions that are an essentially precarious, yet attempt to preserve continuity and succession; for institutions and ways of life to ìstay the same.”

In London-based filmmaker Anna Lucas’ film Gustav, Graham and Lee (2012) we see a film conservationist technician at the Tate clean the mechanics and lenses of slide and 16mm projectors, meanwhile Lucasí camera gazes over VHS and Digibeta video tapes and film reels from a group of well-known male artists held within the museumís collection; the repositories of the machines and materials of passing time and their partiality for slow disintegration.  What this work tell us is that remembering and forgetting are held within the same frame. While in Liverpool-based artist Rosalind Nashashibi’s Bachelor Machines Part 1 and Part 2 (2007) set on a cargo ship sailing between points of call in Southern Italy, Sweden, Portugal, England and Ireland the artist observes the experience at sea, and how it gathers towards her camera, of the ship’s single gender community. These points of contact, between filmmaker and subject and points of landing and departing, are also art historical (“bachelor machine” is a term coined by Marcel Duchamp for the lower half of his work Large Glass (1915-1923). But are equally social: the reinforcement of power structures and hierarchies in the work or ritualised place; gendered: and the conditioning for gender norms, restraining, self-checking and conditioned; and economic: a description of the movements at play within capitalist and patriarchal structures. All forms of measurement and instrumentation – star maps for navigation, marine chronometer for time, nautical miles for speed – change at sea. Nashashibi says, as the screen images shift from observation and documentary to poetry and abstraction, “it insists that you look repeatedly at the same images until they lose their ordinariness.” McCrorie like Nashashibi, who are both, incidentally, graduates from the MFA course at Glasgow School of Art, presents in these unfolding responsive layered sequences and edits ‘how much happens when little happens’.

“The camera has weight”, the film narrator says, its substance is “an engram: the physical and chemical mechanics that turn experience to memory and is a craft of light.” In the impermanent moment the camera finds parity with the manual transportation of a newly-cut birch tree. She seeks to suggest, like the exposed rings of these slender trunks, the camera is an illustration of its own experience. How it is possessed of eyes and memory and charged with mediating, memorialising and mediumistic properties. She counterbalances this condition – a breath of the moment with an appearance of deep time, in ritualised or evolutionary form. Here articulated by a gesture: the transportation of beliefs and thoughts carried over thousands of years: an action that lays multiple hands on the head of a candidate Passionist priest. Time is a repetitive performance. And an intuitive mesmeric impulse. Captured by the flight of a small yellow canary as it flies between points of contact, curtain rail to picture frame, the bird on its flight path a 100 times a day.