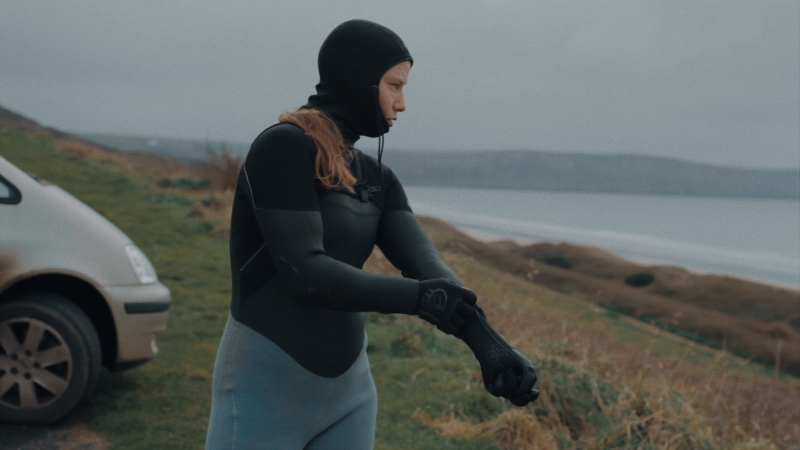 Holly McLean’s If you get the knees right the rest should follow is a ‘documentary turn’ diaristic, fragmented, raw and ambiguous film portrait of the British artist, market-gardener and surfer Alice Vandeleur-Boorer and which through the presentation of key quotidian moments in her life poses essential questions on the nature and place of the documentary subject, intertwined to that of the film’s director, and illustrating, through the spaces revealed in their relationship to the camera, a relationship that can occur between two women – to what can be said, gleaned and known and to what is unsaid, disguised and obscured. McLean’s roving, restless lens shifting between the motifs of observational cinema, the casual, informal and intimate encounters of the home-movie and the strategies of artists’ experimental film serve to illustrate the spaces – physical, maternal and psychological – out on a grey, cold sea,  hollowing out the rot from a disused caravan, in the domestic, loving chaos of Vandeleur-Boorer’s contrasting myriad life. Accompanied throughout is composer Joe Brooks’ soundtrack of improvised breath-like tones, chords and percussion, which often feels like it stands in for or replaces an extra-diegetic narrative voice. Its sonic language removing any need for an explanatory, determining voiceover. The effect is a work full of unfixed gesture, atmospheres, intersections, pauses and between spaces – the connective tissue of lived experience: Alice surfing at sea becomes a metaphor for both freedom and escape, control and wildness; repairing an old caravan, tearing out its damp, rotten innards narrates on the restorative labour to Alice’s mental health crisis, her post-natal depression, following the birth of her child and who makes an appearance on camera, though swirling chalk drawings, food scraps and messy family debris and playful shared glances inside the rear-view mirror of a car.

Positioned on an opposite wall meanwhile McLean presents a collage formed from a mirror-symmetrical study of layered bodies, congealed yellow and black fluids reminiscent of splanchnic or brain tissue, and hybrid, abrasive photographs melding with religious iconography on depictions of motherhood which I think point outward to other experiences or reading or works or films which may have influenced the making of her production. It feels like the collage is pointing to or exploring ecologies of different practices and temporalities like overlapping membranes.

McLean’s delicately connected filmed actions, images, moments, as well as her film’s soundtrack, operate to give only a sense of Alice and the matters that surround her life. The work is shaped by limits, boundaries and skin. The film has elegance and a necessary restraint. Methods which accumulate to deliberate on something both personal and universal – a lens made to compose a study (particularly that between women, and women and children) on nourishment, protection, care and love.

I wanted to offer up my own suggested reading list on Holly McLean’s film, because I also think it acts like a lens to consider one’s own experience. So here a few things that it brought to my mind.

Rebecca Tamás, Strangers, Essays on the Human and NonHuman, especially the texts On Panpsychism and On Mystery, Makina Books, 2020

Helen McCrorie, If play is neither inside nor outside, where is it?, 2019, on childhood, data and play

Rosalind Nashashibi, Where there is a joyous mood, there a comrade will appear to share a glass of wine; The moon nearly at the full. The team horse goes astray, also known as Part One and Part Two, 2018-2019, based on the feminist science-fiction novel The Shobies’ Story (1990) by the Ursula K Le Guin

Image credit: Holly McLean, If you get the knees right the rest should follow (still), 2020. Courtesy the artist.