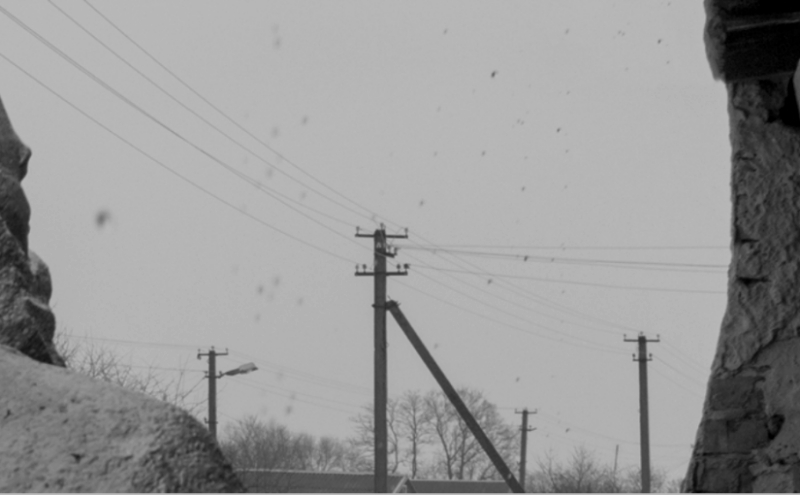 Originally published This is Tomorrow, 11 February 2019

With thanks to Peter Amoore and Cooper Gallery.

Visual artist and filmmaker Phil Collins’ journalistic video essay Ceremony (2018) is structured as a complex melding of transnational road movie, rumination on the (in)visibility of public monuments, archival political portrait and ideological time/image/ machine which seeks to reassess the legacies of communist and political theorist Friedrich Engels (1820-1895) as it follows his fractured semblance, a split-in-two decommissioned statue, as it transits across Europe from abandonment and obscurity in the Ukraine to reassembly and permanent display in a public – privately operated – square in Manchester.

Throughout Collins’ video is the motif of a split identity, a divided  or incomplete self, a divided state: of political, personal and social cognitive dissonances, a perpetual states of anxiety, of reunion and restoration, of comparison and continuity, which through Collins’ rich narration unpacks the construction and deconstruction of communism from the 1917 Russian Revolution to the fall of the Berlin Wall and subsequent collapse of the Soviet Union to the seemingly unstoppable victory (and violence) of contemporary neoliberal capitalism and austerity, its partner-in-crime.

Ceremony operates, with its accompanying techno soundtrack, its juxtaposition of archival footage, public proclamations, historical images, as a social seance channeling and retrieving the spirit of Engels, divining traces of his presences in Manchester in photographs of demolished factories, yellowing newspaper clippings, letters and obsolete maps. One map featuring a neighborhood called “Little Ireland” housing immigrants fleeing famine. All the while the video unequivocally reasserts and (re)reads Engels’ publication The Condition of the Working Class in England (1845) as a diagram, an excavation, of now, an examination of this moment. Depicted, most intensely, in an opening passage falling on faces of the homeless, through scenes of deprivation, drunkenness and loss.

Throughout the feature-length work I sensed allusions to Mike Kelley’s Mobile Homestead (2010-11), which sees a full-scale replica of the artist’s suburban childhood home as it travels across the social and psychological divisions and histories of Michigan, of Zachary Formwalt’s Unsupported Transit (2011), evidencing the shifting ideas of the factory from the shop floor to the stock exchange, Arthur Jafa’s Love Is the Message, The Message Is Death (2016), a revisualisation, through carefully sequenced found footage and sound, of black American history and to my mind theorist and curator Andrea Philips’s text How to work together (2014) which demonstrates that how arts organizations operate can determine their politics and how the arts might be complicit in propagating the narratives of the right wing. In turn how the autobiographical might be drawn through the lives, confessions, deliberations, experiences and traumas of others like those found in the video pieces of Canadian artist Steve Reinke. All the while I am reminded of the photographic self-portrait series by Jo Spence (in collaboration with David Roberts) from 1986 with its declaration that “Middle Class Values Make Me Sick.”

As is often the case with Cooper Gallery exhibitions a wider critical forum of supplemental reading groups, discussions and participatory activities exists. Here the programme considers the atmospheres of austerity, capitalism and the working class, capitalism as barbarism, notions of institutional violence, the rise of populism and the deadlock of Brexit. While an opening panel discussion hears from activists working with asylum seekers, the unemployed and precarious workers. Collectively they discuss the dismantling of the welfare state, Theresa May’s “Hostile Environment”, of sanction culture, of Universal Credit, food banks and media poverty safaris, zero hours contracts and free labour and an idea of state sanctioned ‘social murder.’ The panel ask what makes an activist and considers, tangentially, the Arab Spring, Black Lives Matter, the #MeToo movement, Gilet Jaunes, Occupy and Act Up! and the political ‘antimatter‘ of Trump’s Make America Great Again, Unite the Right, Jair Bolsonaro and Milo Yiannopoulos.

The foundation of Collins’ work is rooted in its capacity to understand and express the meaning and fragilities of human dignity, though the self, in work, in society and in communities. In voice and deed. It considers, with honesty, visual art functioning in an emancipatory capacity. And despite the tensions the work depicts Collins’ film is luminously celebratory. It asks us, directly, collectively and individually, about how to live in a time of crisis and in doing so speaks about a continuity and an inheritance of transformative ideas.