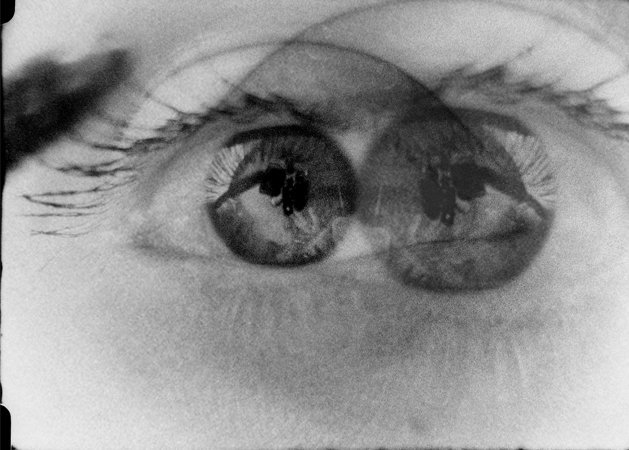 “Is it possible to find a part of yourself that you did not know was lost? Is it possible to discover that you are someone other than who you think you are?” Robert Ashley, Part 3, Questions and Answers, Now Eleanor’s Idea, 1994-95

In thinking about collaboration as an act of assembly, brittleness and precarity, of performance and disappearance, as a constellation, an act of dispersal I also want to think about it through ideas of delay, attachment and abrasion. This short performance and screening taking the form of field notes from the work in progress Taking Counting Blinking Noting: 16mm film as a collaborative action touches on James N Hutchinson’s ideas around the ‘exhibition as object to object as exhibition’, the art object as a constellation, a thing for dispersal, Judith Butler’s Notes on a Performative Theory of Assembly especially her linking assembly to precarity and bodily vulnerabilities and Robert Ashley’s opera libretto on the plural and mutable forms an individual’s identity takes while Gusmao and Paiva’s film sees camera and subject unify.

Reading from Judith Butler’s Notes Toward a Performative Theory of Assembly, 2015 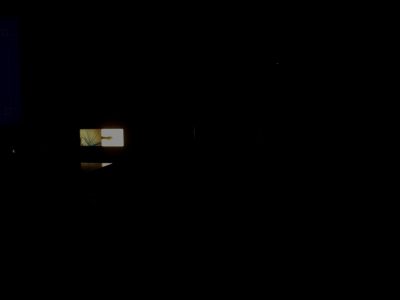 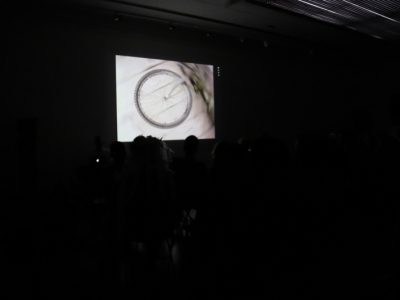 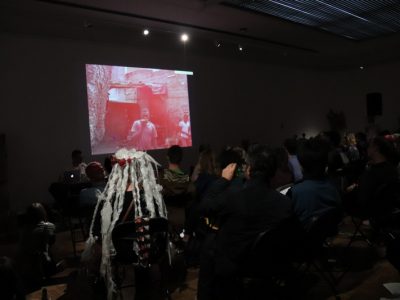 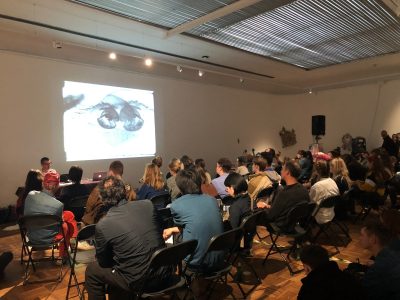 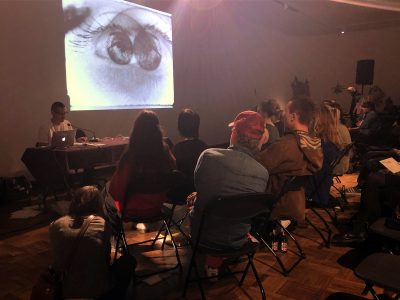 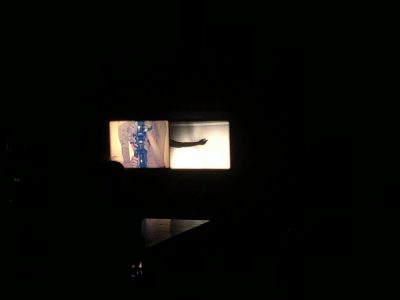 To begin we want to hold ideas about what precariousness, doubt and vulnerability means in each of our minds.

And we form thinking and responses, to ourselves, to the late American composer Robert Ashley’s half-spoken, half-sung question; “Is it possible to find a part of yourself that you did not know was lost? Is it possible to discover that you are someone other than who you think you are?” from his opera Now Eleanor’s Idea, originally performed in 1995 at the New Wave Festival held at the Brooklyn Academy of Music in New York City. A libretto which looks at how mutable and multiple each of our identities is, and to moments where our identities are challenged, abruptly, and change forever. It is worth noting that Robert Ashley in composing his texts brought into voice observations of daily American life, improvisation, found texts (Now Eleanor’s Idea takes as sources, among other writings,  Carlos Castaneda’s books (somewhere between anthropology and fiction) on Shamanism and art historian Frances A.Yates’s studies on Kabbalistic mysticism at the birth of modernism) and streams of conscious thought shaped by a mild form of Tourette’s Syndrome. More of which in a moment.

But at this moment I also want you to remind yourself that you have the right to appear, the right of appearance. And that right also means the right to care, of taking space, of pause, of reassurance, of empathy, of belonging, of hesitation. So the spaces of appearance are complex, and how you might exist, and sustain a livable life, in those spaces might not yet be legible. Collaboration, as a process to engage with, might make that something, to be able to name oneself in the interstices of naming, become legible.

At this point I’d to say a special thank you to artist-curators Sophia Hao and Peter Amoore, without whom I would not be having such a rich career. And to thank Creative Scotland, Anne Petrie at its Visual Arts Department, the artist Oliver Mezger, and for technical support Kenny Christie and the CCA, in Glasgow. I would like to say a very special thank you to artist Michelle Hannah who participated in an experimental collaborative action, the film from which is presented here this evening. And to a series of participants and collaborators on the wider work of which this,

Twin Eye (using the theatrical term) is ‘an aside’. (since it speaks directly to an audience while the main action remains oblivious)

Talking Counting Blinking Noting is a broader project on film, actions and assembly (which even in a staggered form, full of delay, still has potency) and the dimensions, instruments, methods, choreography of collaboration, thought of as episodic, diaristic, brittle, temporal, doubling, multiplying, replacing, merging, overlapping, condensing, augmenting, contradictions, fugitives and phantoms, addition and subtraction is most notably plural. I am also using the title An Aside in reference to filmmaker Tacita Dean’s curatorial project at Camden Arts Centre in London in 2005 in which she is found assembling materials, artworks, film and objects ‘constructed almost as a picaresque novel might be, one thing leading to another by way of accident, serendipity and oblique association.’ And a way to be in-the-moment with another artist, of how do I ask you to see what I see, hear what I hear, hear what you hear, see what you see. Of intimate encounters, shared experiences, what parts of you vanish, what parts appear, the inevitable blossoming of opposites, the rise of irresistibility, the twin eye, the importance of a place of unfinishedness. A refusal for the closing, completing moment. Artist James N Hutcheson in his PhD thesis at the Glasgow School of Art, then reshaped into an event and publication for the Collective’s Affinity and Allusion exhibition stand in May of 2018, describes this as dispersal, as constellations.

You remind yourself too that you also hold the right to disappear, and I am fascinated by acts magical or otherwise of disappearing, assembly allows for disappearance too. And I am thinking of Egyptian writer Haytham El-Wardany’s text for Sternberg press published in 2018 here. HOW TO DISAPPEAR. It is important to announce that our most important encounters are with the unknown. So that might be a dream or the conduct of a sleepwalker or absent mindedness, or fortune telling or concocting spells.

And so having said that at least one of the films in this screening this evening has never been seen in public before, not even to me. The premise is a spell for what Italian-American feminist scholar Silvia Federici writing in her book ‘Witches, Witch-hunting and Women’  published in September of 2018 describes as enclosures, which, as we understand, is the opposite of collaboration. So that film was written, in part, by a woman in my town who practices as a witch. It speaks about enclosures and expressions of bodily vulnerabilities in the form of marks made on or reflections from glitter or gold on the skin. An intrusion on identity-making, things which trap or discipline and undiscipline.

The artist Anne-Marie Copestake tells me she thinks there is no singular definition of collaboration other than it exists in a grey area (of possibility), responsive to the conditions the collaborators are bringing to or seeking from the work, but is nevertheless something that needs to be protected. This  idea of protection then really chimed with me. To my mind then collaboration is not a core, it is rather a method for surrounding.

So I say to you in this respect, quoting Tony Kushner from Angels in America, A Gay Fantasia on National Themes  “The smallest indivisible human unit is two people, not one; one is a fiction. From such nets of souls societies, the social world, human life springs.”