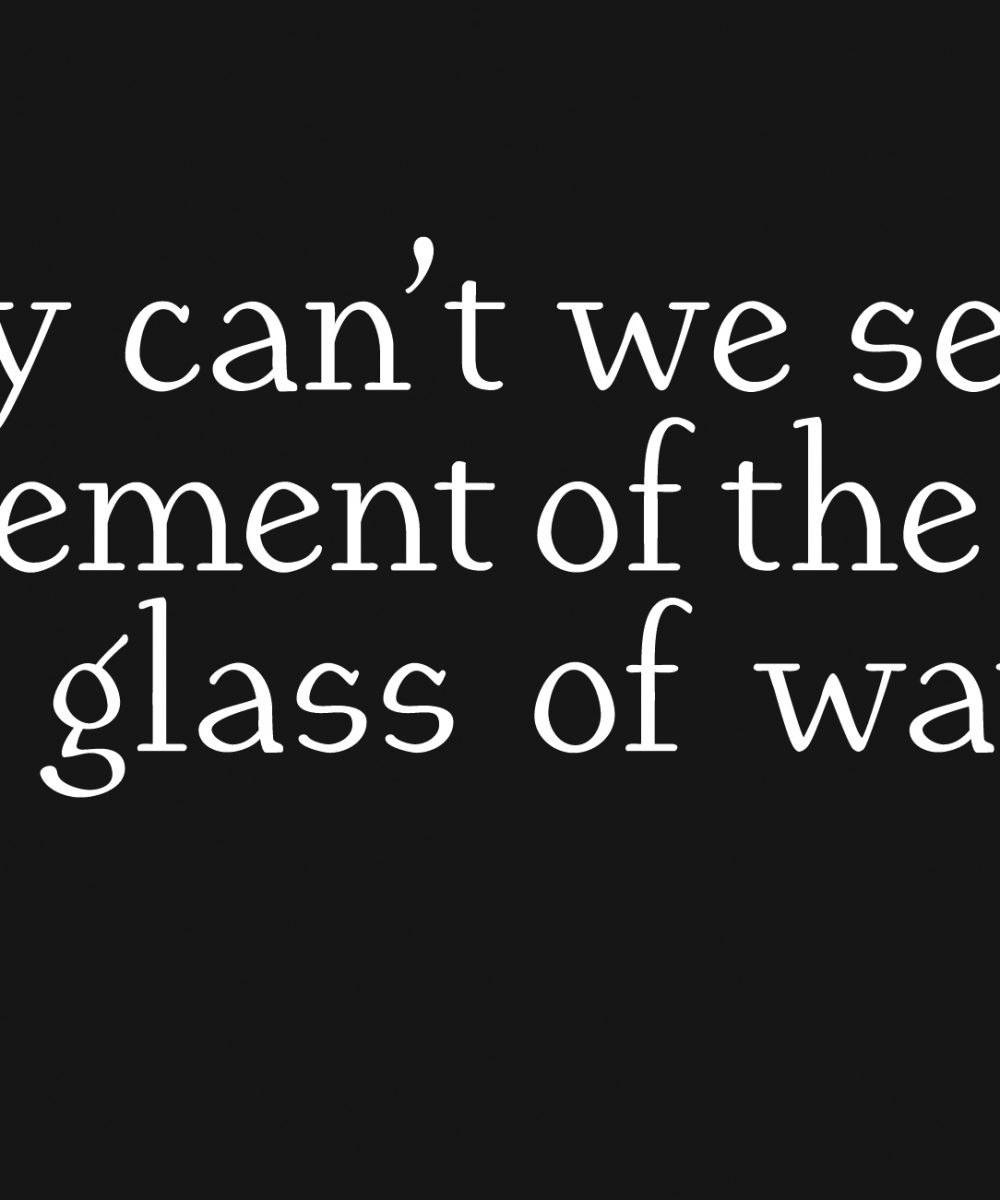 Why can’t we see the movement of the tides in a glass of water? Karen Cunningham

“Why can’t we see the movement of the tides in a glass of water?”1

This essay is composed of shifting observations, using what Fred Moten describes as the act of ‘remembering the present’, 2 suggested by the entanglement of narration, quotation and provocation evident in Karen Cunningham’s moving image work Mean Time (2020). The writing takes the form of agitated, anxious field notes, set to the askew of the present moment; one structured around the indivisibility of the pandemic, the decentralizing movement of civil disobedience described by Black Lives Matter and the uneasiness that has accumulated around Donald Trump’s administration and the reinvigoration of the right-wing.

Mean Time’s scenographic structure consists of a triune of actions accompanied by an orbiting soundtrack of abstract sound and abrupt weighty almost physical sonic interruptions choreographed to a stationary, fragmented and outwardly positioned monologue, observing on travel, class, geographies and the science of time. This voice then mirrors, conversely, the delivery of extended quote broken up and presented by political theorist Ariella Aïsha Azoulay who argues that the origins of photography do not lie with inventors, chemists and dreamers and the development of mechanical, photochemical image technologies at the birth of modernity but rather that photography manifests as a condition from earlier imperialist premises of expedition, invasion and plunder. The image substrate, she says, is suffused with aspects of “this right to destroy, to accumulate, to appropriate, to differentiate, to record what has been destroyed or appropriated, to study, rescue, salvage, and exhibit …” 3 Azoulay’s dissected quote is made to behave internally and expansively. Mean Time’s percussion of historical postcard images, seen front and reverse, retreat in its closing passage which sees the screen obscured and blurred of definition, almost blank, almost motionless – a sublimation, solid to air – and which lends this inchoate formlessness to an expressive and intimate afterword describing the incremental personal passage of time – indiscernible spaces of the in-between of moments to the vast constant global movement of the tides.

From vertical to horizontal, its tilting axes of image, voice and quotation Mean Time’s adjusting raw visual textures act as provocations and objections – on modernity, photography and the irreversible archive (what its residuals and holdings can tell us about the past and what they cannot) intertwined with ideas of time, colonialism, migration and the anxieties wrought by the destabilizing conditions of late-stage capitalism. Its soundtrack – scrapes, thuds, breakage – gives expression to Hillel Schwartz’s observation that sound is an “active historical agent be it provocateur, saboteur, ally or poltergeist” 4 as well as his assertion, melding image, word and noise, that “all sound was accompanied by echoes, just as all light was accompanied by reflection.” 5

Claude Lévi-Strauss’ ethno-anthropological concept of ‘hot and cold societies’ considers how progress is expressed in the technology of things, photography for example, and the dynamics of what curator Alberto Salvadori calls “cultural effervescence” 6 – of societies escaping their past through the irreversible longitudinal direction of history in order to accelerate change. The collateral effect he says results in entropic acts of destruction and reconstruction. A cold society remains occupied by the entanglements of its mythical past within the present moment, and is therefore cyclical, seeking equilibrium, resisting transformation. I think this is what Chris Marker is suggesting through the broken diegetic time and extradiegetic narration, recorded images and synthetic soundtrack in his film Sans Soleil (1983) – a screenplay consisting of a spoken interpretation of letters, accompanying images traveling from Iceland to Africa to Japan and San Francisco, written by a fictional narrator to a fictional reader – that “the great question of the 20th century was the coexistence of different concepts of time”. 7 Mean Time confronts both Lévi-Strauss’ notion of societal disequilibria and Marker’s nomadic, plural temporalities through its rumination on Greenwich Mean Time: the legal, political and socio-economic declaration of time, drawing the world into time zones, dividing the world into new and old and future and past.

“I approach photographs with pens, scissors, and tape in order to break the spell of the photographic document” writes Azoulay. She says: “this fantasy of photographs as discrete objects that can be owned by one person or institution is part of the imperial regime that makes us believe that the photograph captures a bygone moment to which we are the latecomers.” 8 The capturing of images is an event that relies on concepts of time to sustain and make possible its photographic meanings. Within the complexities of this encounter and via the consequences of the image’s interpretation, use, and distribution Azoulay asks: “who and what does the photographic event render invisible?” 9 In Mean Time Cunningham escalates this question through its presentation of the internal mechanism of the scanner. A fluorescent film transition, virtual screen wipe which in its fluid panning from left to right describes in one gesture image capture, retention, reproduction, ownership, redistribution and erasure.

I think of Mean Time reimaging, for the present moment, the asymmetries, flaws and counter-expeditions of narrative cinema and experimental moving image evidencing feminist film theory proposed by Riddles of the Sphinx (1977) by Laura Mulvey and Peter Wollen designed around its broken-up passages of text, its motion, its dimensional soundtrack and interrupted narratives (gaze). Mean Time arrives at another urgent, pivotal time that seeks proposals for disorientation, for reassemblage, for departure – for the breaking of a photographic and historical spell.

2. Black and Blur, content not to be a single being, Fred Moten, Duke University Press, London, 2017, page 1, from the chapter Not In-Between

8. Ariella Aïsha Azoulay: “It is not possible to decolonize the museum without decolonizing the world.” Interview with Sabrina Alli, https://www.guernicamag.com/miscellaneous-files-ariella-aisha-azoulay (accessed 28 August 2020)

This passage was edited out of the original text to adhere to the word count and publishing format used by Collective, but I wanted to include it here: Margin of July (2012) a 35mm film by Lucy Skaer sees the artist remove the central material of each frame arresting the moving image of clarity, movement and narrative. The empty void that replaces the subject also obstructs the gaze and veils the subject in doubt amplifying its peripheries. Skaer’s action illustrates what it is to forget. This amnesia can be found, as Erika Balsom reports in the writing of Roland Barthes, who casts the ocean as a blank space, silent, and dissociated from meaning *. Alberta Whittle’s film What Sound Does The Black Atlantic Make? (2019) expanding from a visit the artist took to the archives of the North British Rubber Company founded in Edinburgh in 1856 through a lexicon of uses for this material in the industrial contemporary world: warfare, medicine, telecommunications. Her film reminds us though water is transparent, the layers and depths of the ocean’s histories renders it dark and blurred, presenting the narratives her own body holds entwined into this historical trade fermenting a metaphor for the fleshy migrations the sea has witnessed. Passage then takes the form of trespass. Tacita Dean’s film Girl Stowaway (1994)  annotates from a still image the journey made by Jean Jeinnie, phantom passenger, from Port Lincoln in Australia to Falmouth in England undertaken in the 1920s entwined into the artist’s contemporary reconstruction of the details of this voyage. Cause and affect accumulate around a number of coincidences between both women whose lives have been lived decades apart. Dean’s film suggests that images (and events) from the past find tactics to touch the present day. Writing on the film artist Caroline Kelley observes: “coincidence is an active form of encounter that exists beyond the manifest will of the subjects”**. This will criss-crossing generations and geographies form patterns and make serendipity the marquetry of time.

Thank you to Karen Cunningham